Kids and Concussions: A Parent’s Guide to Traumatic Brain Injury

It started like any other Saturday in April for 10-year-old Sophie and her parents.

The car was loaded up with Gatorade, post-game snacks, and camping chairs headed for a day at the soccer park. Her parents cheered loudly and jumped up and down with excitement as she dribbled the ball down the field towards the goal. Sophie looked back for half of a second to make sure mom and dad were watching and then BOOM! A player from the opposing team had collided with her, knocking them both to the ground. 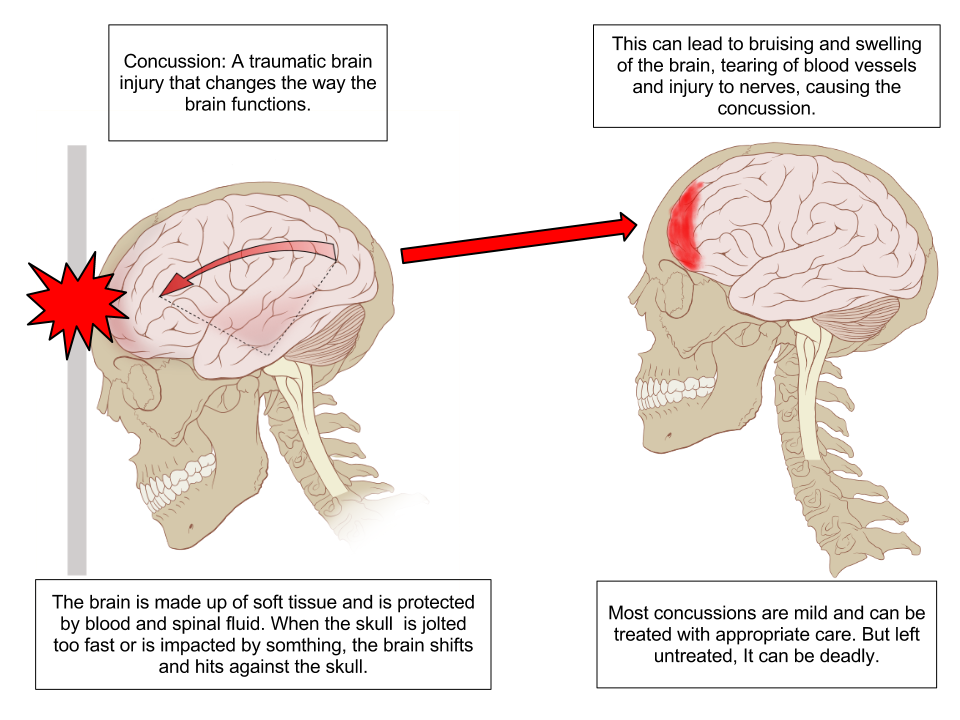 Excitement quickly turned to panic as parents and coaches rushed the field. Sophie's dad scooped her up and held her as mom carefully scanned over every square inch of her baby girl's little body. Aside from a skinned knee and a few grass stains, Sophie appeared to be as good as new. The team coach did an onsite injury evaluation but failed to find cause for Sophie to be benched for the remainder of the game, let alone the rest of the season, so life carried on as usual for Sophie and her family. For several weeks everything seemed perfectly fine, until one day it wasn't.

It started gradually- little things here and there. Sophie had become very sensitive to changes in her daily routine and was increasingly more difficult to wake-up for school in the morning. Sophie's teacher noticed she seemed to be day-dreaming more and joining her friends less at recess. Although not a drastic difference in performance, Sophie started slipping with her homework and in-class participation. Near the end of the school year, she came home from school complaining of a headache and was noticeably anxious after having a tough day of end-of-grade test prep. When the scores of the end of grade testing were sent home, Sophie's parents were shocked to see she was barely performing at grade level despite having been a star student in the years leading up to now. Concerned that something may have happened at school during the exam days, Sophie's parents reached out to her teachers.

Almost to their disappointment, her parents learned there had been no troubling incidents at school.  Like her parents, Sophie's teachers couldn't think of any reason for the difference in Sophie's academic performance over the last few weeks. They were at their wits end with worry. Things that used to bring Sophie joy did not affect her anymore. What was happening to their little girl?

According to the Children’s Hospital of Philadelphia, only 10 to 20% of children report losing consciousness at the time of the incident.

It wasn't until her parents saw a baseball fan on TV hit by a line drive to the head that it dawned on her mom. All of these little changes in their daughter started after that collision on the soccer field. But how could that be to blame? Sophie hadn’t lost consciousness or reported any headache or vision issues following the game. Her coach went through all boxes on the Heads up Checklist put out by CDC, and Sophie passed with flying colors. Her parents had diligently monitored her in the days following the on-field collision- just as they had been taught to do.  So how could this be happening now, months later? How could what they thought was a little bump on the head be responsible for turning their daughter's world upside down? 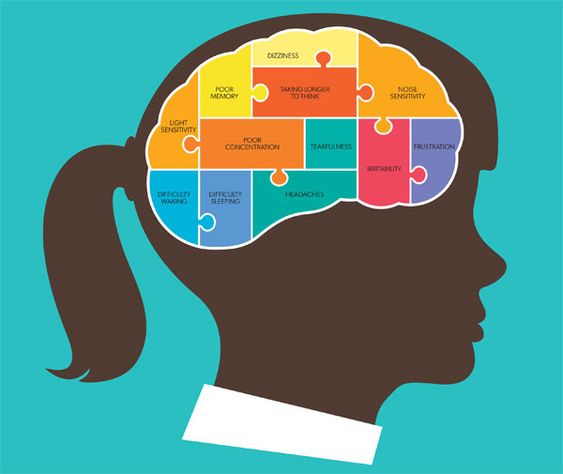 The morning after the light-bulb moment, Sophie's mom took her in for a full checkup with her pediatrician, the same pediatrician she had seen since she was born. Her mom thought surely he would have answers for them. Following a full wellness checkup of everything from Sophie's weight to hormone levels, eyesight to reflexes, her parents were no closer to any answers. Her pediatrician explained there was no standard for assessing concussions so far after the initial incident. He reassured them that the on-field return-to-play protocol was almost identical to the screening questions hospital staff would have asked had they visited an ER the day of the injury. They could have done everything right, and still, Sophie was suffering.

But how could that be? She HAD the on-field concussion screening and PASSED without issues. Although her pediatrician agreed that all her recent physical and emotional symptoms could likely be the result of a concussion- there was no way to say with certainty that she had suffered brain damage from the impact of the on-field collision many weeks ago. What's worse, there was NO standard treatment protocol for overcoming the effects of the impact. How could her doctor send them home with nothing other than a suggestion to keep an eye on her symptoms? How is that going to return their little girl to normal? Wracked with guilt over not looking for help sooner, Sophie's mom threw herself into researching all things children and concussion-related.

“An injury of any severity to the developing brain can disrupt a child’s developmental trajectory and may result in restrictions in school and participation in activities (e.g., sports). As a result of TBI, children can experience changes in their health, thinking, and behavior that affect learning, self-regulation, and social participation, all of which are important in becoming productive adults.” - The Management of Traumatic Brain Injury in Children: Opportunities for Action, a 2018 CDC Report to Congress.

Although it did little in the way of alleviating the worry her parents were feeling, Sophie's mom found some peace in knowing that because many of the symptoms of a concussion don't manifest for weeks, months, or even years after the injury it can be difficult for parents and medical professionals to put two and two together. Currently, there is no one-size-fits-all concussion screening or treatment plan. In fact, until relatively recently, researchers and clinicians didn't even agree whether or not a concussion could cause lasting structural brain damage.  So what was next for Sophie and her parents?  How could they help their daughter now and prevent further worsening of symptoms? Should they pull Sophie from her athletic activities for safety reasons?  What other symptoms might they have over-looked that could have led them to this place sooner? What could they have done to prevent this from happening in the first place? Are there medications for concussions? Were there alternatives to medication for treating concussions? How effective were any treatments at relieving post-concussion symptoms? What was the long term prognosis for kids with concussions? How could they truly monitor her progress when they can't see inside her mind or feel her symptoms?

Each year nearly 2.5 million children report having had at least one concussion over the past 12 months. Of that 2.5 million, 1 million reported two or more concussions over the past year! Even though nearly HALF of all cases presenting with symptoms of second impact syndrome result in death, 69% of concussed kids reported returning to play while still showing concussion symptoms. What's even scarier is that the CDC estimates nearly 50% of concussions go unreported, undiagnosed, and therefore untreated. How many of our most precious resources are suffering in silence? In a report from the US government, concussions were identified as a public health crisis costing the US 80 billion dollars annually. Still, with all that we have learned through advances in brain imaging and research, how is it that there is still no standard for diagnosing and treating concussions. How can we as parents work with the youth sports community to create a culture centered around safety?

At MyBrainDR, we are working to provide Cary and the surrounding areas with access to accurate diagnostic tools and effective concussion treatment plans to protect the well-being of our community’s future leaders.  Neurofeedback has been effectively treating concussions since 1975 and is currently being heavily invested in by both the NFL and our armed forces.  Through neurofeedback therapy, MyBrainDR retrains and creates new neural networks that produce the optimal brainwave activity that is associated with a normally functioning brain.  Although not the answer for everyone, we have a 90% success rate in alleviating the long term symptoms of concussion by correcting the pathology of the problem.  A non-invasive, FDA approved treatment for the most common neurological conditions, neurofeedback produces structural changes within the brain that usually result in a permanent reduction or elimination of symptoms.

If you or a loved one have experienced a story similar to Sophie's we would love to hear from you! Throughout this month, you can follow Sophie's story and learn the answers to these questions and more. As parent's ourselves, at MyBrainDR we recognize how scary and isolating it can be when searching for answers to health concerns we have about our children. We are dedicated to providing compassion, support, and information on many of the most common concerns parents have about their child's mental and physical well-being. In addition to concussions, we offer a safe and effective treatment alternative to medication for everything from ADHD to OCD, anxiety to depression, and insomnia to PTSD.

Join us in raising awareness about concussion safety in youth sports by following Sophie's story.  Together we can create a culture of concussion awareness and prevention!

Come meet us for your free in-person one-on-one symptom evaluation where we discuss if neurofeedback is the right treatment for you. Schedule your consultation by selecting a time below, we can’t wait to meet you!